we are born to win

Start of the year and many things has happened. Rumors of war, mother earth’s comeback to all the things we have done through the years. Lately the Philippines has had a volcanic eruption and is still being under surveillance. Yesterday a lock down has been implemented within the 14 km radius from the mountain to the cities surrounding the volcano. Landscape of the province of Batangas is changed and has been severely affected by the ash fall residues. Families living in the area are in silent desperation. This has never been a problem before but now having at least an appearance of privacy for nursing mothers and young female teenagers are almost impossible to have in an evacuation centers housing at least a little more than 100 families, each.

Yesterday the first lady of the country visited the evacuees with a heavy heart. Her voice despite the sadness in the message she conveyed to the affected public was full of assurance. She said it was the only tangible thing she could give now and somehow it saddened her because beyond prayers, donation and food supply were still insufficient.

People have shown the values of the nation. It is called bayanihan rough;y translated as helping together for free. The people have donated more than enough so much so that people could eat anytime 24 hours a day. Filipinos abroad are also sending their contributions and the government with all its agencies are in until giving everything to the affected Filipinos. First time in recent memory Filipinos were taken care of unlike what happened in Hayan typhoon. The president of the Philippines has directed all concerned to give all what is required to the victims of volcanic eruptions. Inspite of the devastation and fury of Taal eruption no has died as of this moment.

Still, the molten magma is still rumbling under the belly of the earth. The volcanologist have advised all the people in the affected area not to go back as yet to their places. The Armed Forces of the Philippines have already declared prohibition in entering the dangerous zone as Philvolcs (Philippine Volcanologist) in coordination with international scientists have not lowered the alert level 4.

People, mostly poor, have been recipients of charity. There were overflowing of donations of clothes, necessities and food galore. This was the worst of time and this was the best of time for the poor people. The government will be the one to rehabilitate their houses. The President of the country have said so. This leader has the habit of doing hat he says.

As of the moment young ones in the evacuation centers are having debut part, fashion contest by donations of clothes from the richer members of society. The government has not asked anyone outside the country for help. And indeed the victims have been having assistance required. having said that some evacuees were 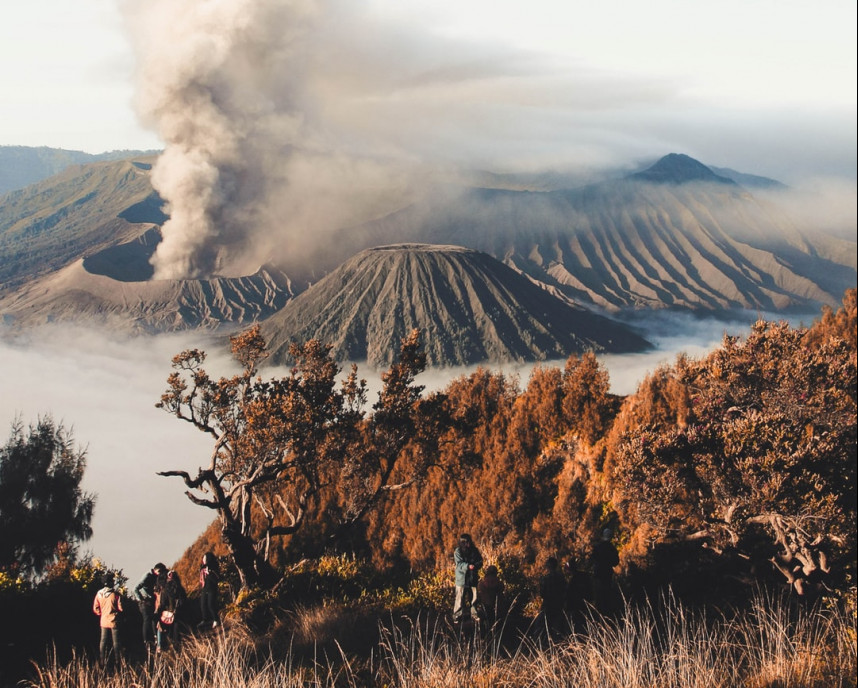 settled from pocket neighborhood outside the dangerous areas. These are good Samaritan who have taken initiative to welcome some families. As of this writing help might have been given to all this neighborhood.

What is the point, The camaraderie, helpfulness and support is an echo of what we are having in our virtual community the WA community. And it seemed that no matter would be the challenges when there is unity, charity and generosity from all sides, life could always be bearable even inspiring and enjoyable!

As can see at the above picture. A lot of people are surprised that the real volcano is actually at the back of the iconic volcano which in front. However, the one that exploded was the one with smoke. Accordingly, Taal volcano may look like a dwarf one but underneath like a pyramid it’s base touches the Philippine Sea and the island of Luzon. It could really explode in a way that may eliminate the biggest island of the Philippines to scattered small islands. This was one of the theories i have read . In

The truth of the matter is the Philippine has about 25 more or less active volcanoes dotted all over the islands of the Philippines. And they could start exploding. As of this moment the ring of fire which encompasses the areas around the edges of the Pacific Ocean which include the Philippines. Japan, Mexico, California, Chile and many more. They have many volcanoes. In fact many of them are exploding a few days ago including in New Zealand.

Volcanic eruptions are the facts of life just like self-made catastrophe could happen to those who do not think about the effects of their action. Eventually it will spell out the kind of life you will be having if you have invested your money, your skills and your time to something that will give you sources of income, it could mean an explosion of incomes from many sources. What we sow we shall reap. So to learn and unlearn many limiting beliefs is of paramount importance for all of us to do as soon as we can. The effect of creating wise investments, and effort in your online business will have its effect afterwards. Never before. It means we need to sweat it out and take extra effort. Hard work as well as smart work are needed in order to garner such a wonderful explosion. That is explosions of many sources of income.

. Volcanic eruptions remind us that we are under the mercy of time and circumstances. And those who found wisdom from the Taal Volcanic Eruption will be served well if we keep our mind and our heart on the ground. Dreams are but the 1% of the total endeavor. The 99% is work, work, and work! A lot of us are surrendering to the thoughts that they are already OK and its too late for them. There is nothing further from the truth. Old people have more time to focus on what matters for example the making of websites for online business. This is the time, in fact, to join this trending that will stay for long years to come. Blessed are those who have started doing their blogging in one way r another. The best part of this effort is it is enjoyable and there is no pressure. A lot of learning to have cause many of us to unlearn what we had understood before.

What we need is we have to be dynamic, teachable and trainable when challenges like a volcanic explosion in that proportion we can run away and we can hide. We can be safe not only saved because we know what will happen. That is the same way on financial literacy. We will know the end of the person if he does not change that thing are, the things he is doing today will not change anything after 5 years if he doesn’t change the level of his ways of doing things

Preparation and prevention are keywords which entails advanced readiness by improving our capabilities and capacity to handle such serious situations. That is the way to stand strong amides calamities. You will be like the tower founded in the rock! This is the way it is in this real world. Those who are well-prepared are those who are more likely to survive the onslaught of painful enemies such as price increase, inflation, deflation and even economic cruses in pandemic proportion.

We need to listen hard to the dictates of lour time. Choose the place where you should be located. Find the pointers where you should go. The kind of people, the topography, the water source and the place where it is safer than the rest of the world! Needless to say we have to invest in this kind of possibilities because it is told in the Book that this kind of scenario could happen anytime soon!

The best way to earn extra income is to learn the online business, This could be a life changing experience for you. Click:https://my.wealthyaffiliate.com/order/signup?a_aid=01befbb5

My family and I can only hope and pray…